Total Eclipse is episode 4 of Series 5.

Saint Hopes is in a state of excitement as staff and students witness a rare solar eclipse from the playground. As the sun is eclipsed, everyone watches and are mesmorised by the colourful entrancing spiral which  appears on the moon's surface, with only Mrs King missing the action. Suddenly Frank receives a warning text from Stark and he sees that the spiral is having a hypnotic effect on everyone. Frank quickly manages to get Carrie and Oscar free from the hypnotism  but is too late to stop Rose being hypnotised.

At 4pm the Grand Master will transmit the 'attack spiral', in order to force everyone to form a huge army and invade Belgium! Meanwhile, Frank starts to suspect that the means of reversing the hypnosis might be found in a most unexpected place: Mrs King! Can Frank and the spies unlock the spiral in time to bring Rose back, dehypnotise the nation and stop the Grand Master's plans? 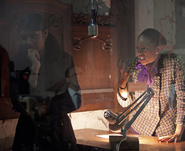 Mrs King unconscious after saving the world.
Add a photo to this gallery

Retrieved from "https://mihigh.fandom.com/wiki/Total_Eclipse?oldid=26330"
Community content is available under CC-BY-SA unless otherwise noted.