Tom Tupper is part of the M.I. High spy team from Series 6-Series 7.

Tom is the technical genius of the group; often creating gadgets to help out the team and hacking into various mainframes to stop KORPS. He was spotted when he hacked into NASA and reprogrammed the Mars rover to write "Tom" on the face of Mars. He may not be much of an field agent, but if the team is on mission he does all he can online. Although in series 6, episode 8 Tom shows he's not only on the team as hacker, online gamer, and technical genius but also because of his ideas and creative thinking.

Often calling himself the boy genius, Tom seems to have a very sarcastic sense of humour. He sent Roly a message from "Aneisha" saying "I Love You" in Aneisha's voice, which Aneisha doesn't find very funny.

Tom is jealous of Dan because Dan always gets to "play the hero", while Tom is always stuck behind a computer and ignored. In one episode, a science competition only increases Tom's jealousy. Dan with his volcano although Tom's germ-specs would surely have given him first prize. Even on a social platform Tom feels overshadowed by Dan, as Dan often has a crowd of groupies hanging around him, who treat him like a god. Although Dan thinks that this is very annoying, Tom just gets more jealous at the attention all the girls give Dan. Despite their differences they are very good friends and always look out for each other. They both appreciate each others' respective skills, and although they occasionally wind each other up, they will always support the other.

Tom and Aneisha have lots of reasons for finding each other annoying. On one occasion, Tom left a voice mail on Roly's phone saying "I love you" in Aneisha's voice, to which Aneisha responded, "I'm gonna dedicate the rest of my life for getting you back!". Despite the jokes, they seem to become closer over time. He is known to tease her about her Auntie, the super strict deputy head

They often make friendly jokes at each other's expense. For example, in one episode in Series 6, Frank says, "things could get dangerous!", and in reply Aneisha says, "Sounds like it. What if he runs out of biscuits?" referring to Tom at the base who eats mountains of biscuits. Tom plays the joke through until Frank tosses him a packet of biscuits.

Although Tom and Aneisha seem to have a strong relationship, in Series 7 there is some conflict. Tom hacked into a video game so he would win every time, and when Aneisha finds out she seems quite disappointed in him. Tom's jealousy of Dan is occasionally fueled by Aneisha's comments, like when she says that being behind a nice warm computer "isn't the same as being in a room with a ticking bomb"

Tom and Zoe are very good friends. Whenever Zoe is down Tom always tries to make her feel better and when Tom feels left out Zoe always trys to include him somehow.

Zoe has huge respect for Tom's ability and Tom, like the rest of the team, is often pleasantly surprised by her skills.

In "The Germinator", Zoe spent a lot of time with Tom trying to get his mood up because he never gets any of the girls.

Frank is Tom's mentor in M.I.9 and Tom looks up to him very much. This is because Tom spends a lot of time down in the base on computers with Frank, which makes Tom close to him.They all look up to him and trust him as seen in the episode where Frank gets arrested. 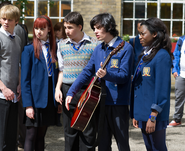 "The Face of Revenge".

"Return of the Dark Wizard".

"Return of the Dark Wizard".

Series 7.
Add a photo to this gallery
Retrieved from "https://mihigh.fandom.com/wiki/Tom_Tupper?oldid=26950"
Community content is available under CC-BY-SA unless otherwise noted.