Stella is the third Chief Agent of M.I.9, she spotted the talents of Aneisha Jones, Dan Morgan, and Tom Tupper and put them into the M.I. High Program.

She can be strict, but cares for the agents and doesn't want them to get hurt. If a mission goes wrong or something happens to the MI High team then she usually holds herself responsible, showing her more maternal side towards them. She also follows protocol no matter what; in the episode, "Trojan KORPS", she arrested Frank for being a traitor, even though her feelings said otherwise, because the evidence pointed to him.

She used to be Frank's girlfriend 10 years ago until she dumped him. In "The Fall of SKUL", it is shown that they are still close although tensions arise between them during the course of the series. It is revealed that the the source of this conflict is when Frank led the final assault on the KORPS base. The M.I.9 team suffered terrible losses and Stella blamed Frank for the disaster. She realizes it wasn't Frank's fault and in, "The Final Endgame", she risks her life to help him. Then they both kiss just before almost dying. After they are saved Stella asks if they can forget about it to which Frank replies with "No, I don't think we can."

She was removed from command and arrested in "The League of Mata Hari".

In "We Need to Talk About KORTEX" she is saved from prison by Frank, Keri and Dan then helps them take down KORPS. It is revealed that she was framed by Hamish Campbell and Mike Stern who were working for KORPS.

It is unknown whether she was reinstated after "We Need to Talk About KORTEX".

File in "The League of Mata Hari" 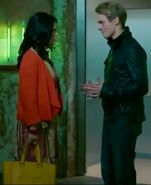 Stella in the base. 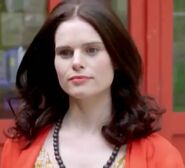 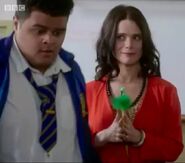 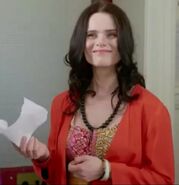 Stella in, "The Final Endgame".

Stella in, "Revenge is Sweet". 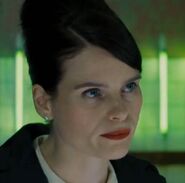 Stella, Frank, and Aniesha in The Last Stand

Frank and Stella kiss in The Last Stand
Add a photo to this gallery
Retrieved from "https://mihigh.fandom.com/wiki/Stella_Knight?oldid=27416"
Community content is available under CC-BY-SA unless otherwise noted.