Rose Gupta was one of original spies in M.I. High, she was also one of the original Saint Hopes kids. She appeared in every episode throughout all of Series 1-Series 5. She is portrayed by Rachel Petladwala.

She has an extremely high IQ, winning various competitions and producing miscellaneous inventions throughout the series. At school, Rose is shown as a stereotypical type of "nerd" with big glasses, hair tied back and always shown carrying several books. On numerous episodes shown, she would usually use the excuse: "Can I go to the toilet, please", in order to retreat to the underground HQ. Rose comes across as a polite and well-behaved student in class as well as being classified as the 'nerd' most of the time, it does not seem to affect her, however at times she can get frustrated over stupidity, clumsiness or not knowing something.

In Series 3, "Think Tank"; Rose is sent to another school. Forcing her to leave Saint Hope's and M.I. High. Her brain is then wiped, meaning that she can't remember anything. At the end of this episode, her memory is restored. She is then back at Saint Hope's once again working for M.I.9.

In Series 1 and Series 2 she wasn't very social and didn't have any real friends, only socializing with Blane Whittaker and Daisy Millar because of M.I.9 however in Series 3 she begins to become more confident and has more friends. She gets on really well with Oscar Cole and Carrie Stewart, as well as Avril Franklin and several encounters with Scoop Doggy (who had a crush on her).

Throughout Series 1 and 2 she had a crush on Stewart Critchley, and during Series 4 and Series 5 she had a possible crush on Scoop Doggy, who in turn, had a crush on her, and she also had a small interest in Vinnie; in, "The Crystal of St Helena".

She is the team's scientific, technical and analytical expert. She also is excels in field work as shown many time when she is with Carrie and Oscar, but Blane and Daisy feel that she can't do well in field work so in Face Off she breaks into M.I.9 doing back-flips and cartwheels, Blane, Daisy and Lenny are surprised and now takes it seriously that Rose can do really well is both field and technical work. In the episode, "SKULdiggery", it is revealed that she is part of MI38, where she works at the weekends as an archaeologist as one of only two agents. In series 5 it is shown that Stark trusted her more than Carrie and Oscar often ordering her to do their missons.

Being very calculating and highly intelligent, Rose can be very insensitive, arrogant, and cynical because she lets her intelligence outmanouvre her in many ways. Her intelligence makes her an outsider at Saint Hope's. Her sociality is questionably poor, since she is seen as a target for jealous bullying. She is also highly idealistic and rather insensitively gives her opinions about people, sometimes to their faces. She deeply cares about her teammates and is always there to save the day.

Rose is shown to be occasionally arrogant, dismissive, and selfish. She dismissed Carrie's emotional breakdowns in "The Patient", displaying a certain intent on covering up her bigger mistakes, to no apparent avail. This does show her to be both proud and, also, rather arrogant and fierce-tempered. Rose is brave and practical, rather resourceful and able to remember several details when it comes to deduction skills. Rose also is quick-thinking and strategic, able to outwit far cleverer opponents.

Although she seems like a nerd at school, she is seen as a large part of the team. She may be good with gadgets and technology but she is fantastic at hand-to-hand combat and can outthink her opponents very quickly. Her skills aren't shown very frequently, but she still shows superb martial arts talents and can defeat several opponents.

"Day of the Jacket"

Rose in the base, from Series 1.

Rose in the base, Series 5.

The team in "Think Tank".

Rose in "The Sinister Prime Minister" 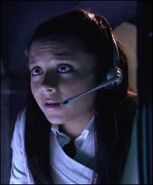 Rose in "The Octopus"

Rose and Abergavenny Smith in "SKULdiggery"
Add a photo to this gallery
Retrieved from "https://mihigh.fandom.com/wiki/Rose_Gupta?oldid=27660"
Community content is available under CC-BY-SA unless otherwise noted.