"The twenty-first century faces a new kind of threat. Old school spies have had their day and M.I.9 must create a new breed of skilled, undercover agent. Hidden in a place no villain would think to look. Welcome to M.I. High."
―Series premise at beginning of each episode from Series 1-5.

"M.I. High" is a CBBC children's spy-fi adventure adventure series. It was created by Keith Brumpton and produced for the CBBC by production company Kudos Film and Television.

It follows in the success of the Young Bond and the Alex Rider series of books and films. M.I. High is recorded in high definition and is shown on the CBBC Channel and CBBC Outputs on BBC One and BBC Two. M.I. High is also shown on the BBC HD Channel. Repeats also frequently air in Australia on ABC3.

The only spies left undercover are those still being trained, including those still in school. Their base is 230 ft below the school, accessed by a high-speed lift from the caretaker's store room, which changes the spies' clothing and hairstyles.

The identity of the villain across the series, the Grand Master, remains a mystery within the show, although a glance at the credits reveal that since series 2 he has been played by Julian Bleach. In series 1 his voice was performed by Kerry Shale and a "supporting artist" appeared on screen in shadow. M.I. High officially came to an end on 21st March 2011. Series 6 was revived in 2013 with Aneisha Jones, Dan Morgan, Tom Tupper, and Zoe and a new school called Saint Hearts then Series 7 with Aneisha Jones, Dan Morgan and Tom Tupper once again but this time with a new addition: Keri Summers. 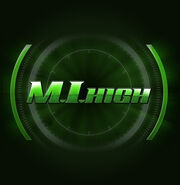 Retrieved from "https://mihigh.fandom.com/wiki/M.I._High?oldid=27515"
Community content is available under CC-BY-SA unless otherwise noted.