Kenneth Flatley is the Headmaster at Saint Hearts, and previously Saint Hopes. He is the only character to appear in every series. He is portrayed by Chris Stanton.

He is easy going but has a determined streak and an obsession for getting things right. He really believes in Saint Hearts's and its pupils. He has great patience and works long hours without complaining. Though there has been no improvement in school results, morale or truancy levels, Mr. Flatley's optimism remains un-dented. He was slightly jealous of Lenny, as Helen Templeman liked him and he has a crush on her, showing this by making him do lots of jobs, however he seems to get on better with Frank London, and uses a friendship with him to assist with escaping Mrs. King. This is shown in "Millionaire Flatley" when he goes straight to Frank after getting a letter about blowing up the school and when he calls Frank when he is trapped in "The Hive".

In the episode, "Nano Nits", the nano nits class him as weak minded and perform a personality swap on him, turning him into a version of The Grand Master, known as: The Head Master. He evilly gives kids lots of homework and he uses his goldfish Flipsy as a substitute for Flopsy. He has shown great strength for being able to overpower Blaine with a gold bar.

Mr Flatley has absolutely no idea or any of the M.I.9 activities happening at the school, ironically, he is often right in the middle of a M.I.9 situation.

Mr Flatley as a Japanese fighting fish in "Mind Machine".

Dan and Mr Flatley locked up in The Helberg in "Prison Break". 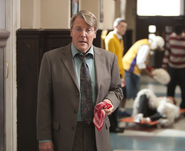 Mr Flatley in "Day of the Jacket".

Mr Flatley and Preston in, "The Mayze".

Mr Flatley in, "The Man Who Drew Tomorrow".

Mr Flatley talking to Frank in, "Frankenstein".
Add a photo to this gallery
Retrieved from "https://mihigh.fandom.com/wiki/Kenneth_Flatley?oldid=27383"
Community content is available under CC-BY-SA unless otherwise noted.