"Since I took over, it's pointless to think of KORTEX and M.I.9 as different organisations. For all intents and purposes; KORTEX is M.I.9."
―Hamish to Mike Stern in, "The Last Stand".

Hamish Campbell is a KORPS agent who was placed in M.I.9 as a double-agent. He framed the League of Mata Hari for betraying M.I.9, gaining him the position of Head of M.I.9. He was later removed from his position when KORPS was defeated by M.I.9 in "The Last Stand".

He was previously one of M.I.9's best agents but was demoted to Head of Stationary when his case on the League of Mata Hari was proved to be a conspiracy. He became Head of M.I.9 and replaced Stella Knight in "The League of Mata Hari" when she and the whole league (which included most M.I.9 Head of Departments) were arrested by when his conspiracy turned out to be real. Hamish helps the team out on missions and has the ability to keep very calm under pressure, though while working with the M.I. High team he seemed rather impatient. The Minister of Security asked for Frank London to be the Head of M.I.9 but he refused as he was upset with Stella's arrest. Aneisha mentioned to the minister that Hamish could be the Head after helping save the day being one of a couple of agents who didn't get arrested.

In "We Need to Talk About KORTEX" and "The Last Stand" Hamish was found to be working for KORPS after GDHQ's Edward Lambsbottom disappeared after talking to them. They also overheard Hamish being friendly with Mike Stern (disguised as Head of GDHQ Mike Stern), who was supposed to be in M.I.9 prison.

In charge of the KORTEX/M.I.9 project, arrested in “The Last Stand”. 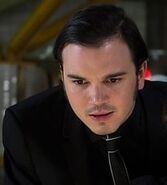 Add a photo to this gallery
Retrieved from "https://mihigh.fandom.com/wiki/Hamish_Campbell?oldid=27435"
Community content is available under CC-BY-SA unless otherwise noted.