Frank London is the current spy handler for M.I. High and caretaker at Saint Hearts, formally Saint Hopes. He appeared in every episode from Series 3-Series 7.

He is an uncannily intelligent man who leads the M.I. High team. He poses as the school caretaker which is why most of the students and staff don't take him seriously and find it hard to believe he went to university. His storeroom is the secret entrance to the M.I.9 base, deep beneath the school. He has his own personal spy gadgets including a signalling device concealed within the handle of his broom, which he uses when in caretaker disguise to contact agents under his care.

Stella Knight used to be Frank's girlfriend ten years ago until she dumped him. In "The Fall of SKUL", it is shown that they are still close. In "Trojan KORPS" it is revealed that he used "L.O.V.3.L.Y.S.T.3.L.L.A" (lovely Stella) as his password in the bunker 10 years ago. Stella is still very protective of Frank. There can be a lot of tension between them and it is revealed that the source of this conflict is when Frank led the final assault on the KORPS base. The M.I.9 team suffered terrible losses and Stella blamed Frank for the disaster. In "The Final Endgame" when Frank is dying in the reactor core while trying to stop an overload, Stella goes in after him to help, knowing that she too would die. She helps him complete the code and then they sit down together as they are both dying. They end up fixing what had happened ten years ago and Stella realises that it wasn't his fault. Then they both kiss just before almost dying. After they are saved Stella asks if they can forget about it to which Frank replies with "No, I don't think we can."

He is extremely skilled in hand-to-hand combat and able to hold his own against the Crime Minister in "The Final Endgame". However, she was a lackluster enemy.

Also, he has a fierce sense of right and wrong: In spite of his extreme hatred of SKUL and what they have taken from him, he still tenaciously believes that it is unfair for them to influence the General Election when the Grand Master attempts to become Prime Minister, on account of the fact that it is against M.I.9 regulations and violates the spirit of free elections. 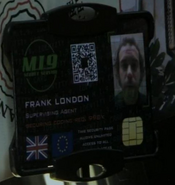 Frank and Stella in The Last Stand

The team, Frank and Stella after the explosion

Frank and Stark arguing in "Return of the Mummy".

Frank with the Dark Star, in "Dark Star".

Frank with Oscar and Rose in "Fit to Wurst".

Frank whilst in costume training Rose in "Art Attacks".

Frank when turning to a Super-Solider in "Frankenstein" 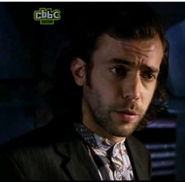 Frank at The Transmorpher in "The Face of Revenge" 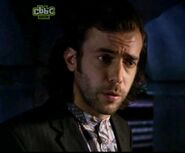 Frank, Stella and Aneisha in The Last Stand 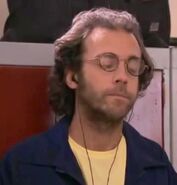 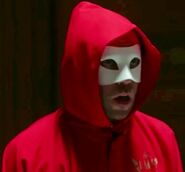 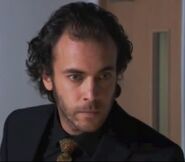 Add a photo to this gallery
Retrieved from "https://mihigh.fandom.com/wiki/Frank_London?oldid=27725"
Community content is available under CC-BY-SA unless otherwise noted.