He is a fun, action loving, below average student. He has been best friends with Stewart Critchley since they were 6 years old but since becoming a spy he has not been able to spend as much time with him.

Blane has a karate black belt, and in many episodes he uses his skill to fight villains, he has a lot of imagination when it comes to invent excuses when he's being called by Lenny for missions, or for distracting Stewart Critchley. He was one of the first M.I. High agents.

After the end of series 2, both Daisy and Blane leave the series to be in project Alpha, training new spies.

Combative, extremely brave and sceptical, Blane is an individual who has difficulty delaing with being an outsider on the M.I.9 team. He is charismatic and heroic, but also hot-tempered and sarcastic. He gets on well with nearly all his friends, despite his optimisim and skepticism.

He is a proficient unarmed combatant, showing exceptional skill in Karate. 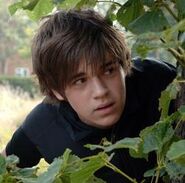 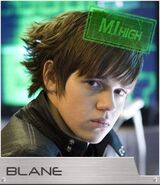 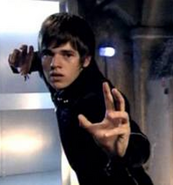 Blane in "The Sinister Prime Minister" 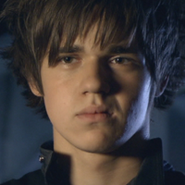 Blane playing a Gibson SG-like guitar
Add a photo to this gallery
Retrieved from "https://mihigh.fandom.com/wiki/Blane_Whittaker?oldid=27100"
Community content is available under CC-BY-SA unless otherwise noted.