"The past is history, the future is a mystery, and today is a gift; that's why they call it the present."
―Aneisha Jones in, "The Man Who Drew Tomorrow".

Aniesha Jones is part of the M.I. High spy team from Series 6-Series 7.

She is fun, friendly, and very intelligent. She excels in drama, which is good for undercover field work and for creating excuses to get herself out of trouble; according to Stella she was spotted with the president of the United States, the foreign secretary and had a front row seat at the Royal wedding - her excuse was that she needed big names for her petition of Human Rights.

Aneisha and Tom are best friends: Tom pranks Aneisha a lot sending love messages to Roly using voice software, which she found very annoying saying she was 'going to dedicate her entire life to getting him back', and he is also seen teasing her about her aunt (Mrs King) throughout Series 7. In the episode, "The Man Who Drew Tomorrow", she got Tom a present at the end/start of the mission. But underneath all that she likes Tom. Sometimes though Aneisha can be thoughtless when it comes to Tom's role in the group, for example in the episode "Return of the Dark Wizard", Aneisha comments that sitting behind a desk is not the same as being in the same room as a ticking time bomb. She also doesn't like it when Tom cheats saying that she thought she knew him but obviously didn't. Despite this though, the two make up in the end and always have each other's backs. Another reason why they are best friends is that Dan and Zoe always used to work together.

Zoe and Aneisha are also very good friends and Aneisha was trusting of Zoe from the start. She and Zoe often hang around together, and it is shown in "Old School" Aneisha cares for her a lot. She is also seen to be friendly with Zoe ,who becomes a new addition to the team in Series Six - Episode One (The Fall of Skull), once again, trusting her from the start, and helping her.

Her friendship with Dan is a good one, they look out for each other, confide in each other etc. Aneisha is seen comforting Dan in The Mayze, telling him that Zoe will be back very soon as she knows Dan has a crush on Zoe.

Aneisha is a bubbly person, and ou of the whole group, will try to see the positive side of things. She also has a massive grin that appears on her face, like in The League of Mata Hari when Hamish Campbell was named Head of M.I.9.

Aneisha is a key member of the group, her specialist skills are disguises and field work and her incredible instincts; however she did often feel left out when Dan and Zoe ditch her on missions and because her martial arts and fighting skills aren't as good as theirs:

Aneisha and Dan in, "The Mazye".

Aneisha and Mrs King in, "The Mayze".

The team in, "Frankenstein".

The team in "The Man Who Drew Tomorrow".

The team in, "The Shadow Games".

Aneisha in, "The League of Mata Hari".

Aneisha and Mandy in, "The Problem Probe".

Aneisha in, "The Problem Probe".

Aneisha, Dan and Tom in, "The Fall of SKUL".

Aneisha, Dan and Frank in, "The Fall of SKUL".

The team in, "Trojan KORPS". 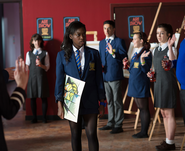 The team in, "Mission: Incredible".

The team and Frank in, "Grosse Encounters".

Aneisha in, "One Flew Over the Budgie's Cage".

Frank, Stella and Aneisha in The Last Stand
Add a photo to this gallery
Retrieved from "https://mihigh.fandom.com/wiki/Aneisha_Jones?oldid=27642"
Community content is available under CC-BY-SA unless otherwise noted.